Historically Castelfusano was an old hunting estate of the Chigi family situated just 25 km from the center of Rome and 1.3 km from the Roman coast.

The name derives from the magnificent baroque castle, frescoed by the famous Pietro Da Cortona in the 1620's, which lies in the midst of a centuries-old pinewood which is still owned by the same family.

Most of the land around the castle was taken away in the late 1930's. However 35 hectares around the castle are still privately owned and it is here that a member of the family decided to build a tourist village called Country Club Castelfusano.

Castelfusano is located in the midst of a centuries-old Mediterranean pinewood just a stone's throw from the sea, in the heart of the Roman countryside and a few kilometres from Rome. 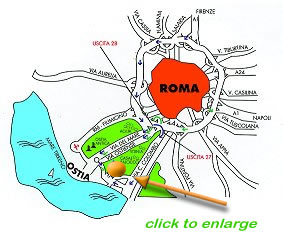 How to reach us

•Both from Fiumicino Airport ("Leonardo Da Vinci") and from Ciampino Airport a shuttle bus to the Country Club is available (fixed price).

•Students arriving at Roma Termini (the central station) have the choice between a shuttle bus which takes them to Castelfusano (fixed price) and public transport. If they choose the latter they need to take the underground (Metropolitana) Line B (direction Laurentina) to Magliana Station.
From Magliana, electric train to Colombo Station where a shuttle picks them up free of charge.

Free shuttle bus service (Monday to Friday) from the Country Club to the local beach and back. On weekends public buses are available.

Courses are offered in June, July and August. Six levels are available, from absolute beginners to high intermediate. Advanced students can attend the school in Rome.

The maximum number of students per class is 15. Students who already know some Italian can enrol at times other than course-starting dates.

Classes are held from 9.00 a.m. to 1.00 p.m. from Monday to Friday. New courses start every 4 weeks. Each level lasts 4 weeks. Minimum attendance is 2 weeks.

Attendance is daily from Monday to Friday and varies from 3 to 6 hours a day. Minimum attendance is one week.

Students attend a group course in the mornings (4 hours/day) and individual tuition in the afternoons (2 hours/day).
Particularly suitable for those who need Italian both for general and specific purposes (dealing with specific topics in specific settings and/or other particular aspects of the language).